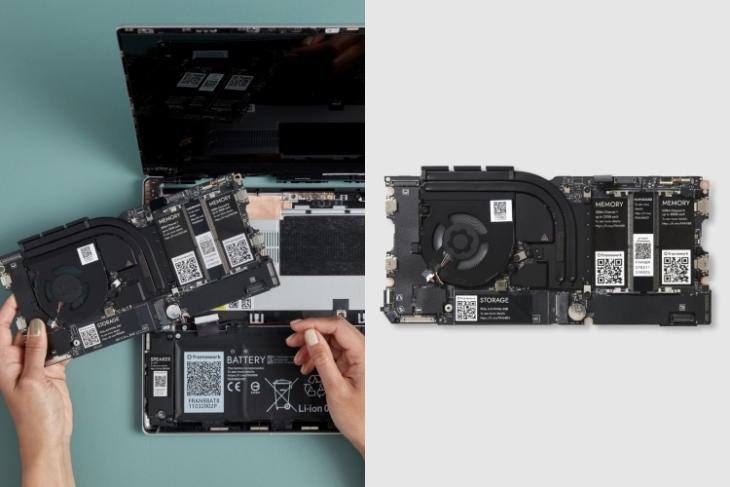 Last year, a company called Framework launched a customizable and user-upgradable laptop for computer nerds who love to tweak their machines. Now, to give its users more freehand in upgradability, the company has started selling pre-built motherboards without other laptop parts. This will enable you to upgrade the processor, GPU, and other critical components without needing to replace the entire system or build your mini PC around it. here are the details!

Framework Mainboard is primarily a full-blown, Intel Core-powered system that allows Framework laptop owners to upgrade their devices without getting rid of existing enclosures. The company has released the motherboard three configurationsAll of which are powered by Intel Core processors, Intel XE graphics, and feature a built-in heatsink and a 64mm fan.

base model pack An Intel Core i5-1135G7 CPU with other components. The other two variants, on the other hand, pack an Intel Core i7 CPU – Core i7-1165G7 and Core i7-1185G7, paired with DDR4 RAM and M.2-based storage. All of these motherboards are powered by a USB-C port. However users can add more port modules from the framework’s online store.

For the price, the Framework Mainboard Start at $399 (~Rs 30,529) for the base model. While the mid-tier variant with Intel Core i7-1165G7 CPU is priced at Rs. $549 (~Rs 42,000)The highest-end model with an Intel Core i7-1185G7 processor is priced $799 (~Rs 61,139), They are available for purchase on the official store of the framework. Users can also visit the official guide page from the framework to learn more about the component-replacement process for laptops.

In addition, the framework also shares all the documentation and 3D-printable designs that developers can use to design their own devices around the motherboard. The company hopes that the community of computer enthusiasts can do something creative by using its components as the basis for its products.

Furthermore, this framework gives laptop owners an opportunity to upgrade their existing laptops without replacing them with new ones. In the end, this not only reduces the amount of e-waste in the environment but also makes sense from a financial point of view. Perhaps, sooner than later, the company may expand its portfolio with motherboards powered by the latest 12th-Gen Intel processors. So, what do you think about the Framework’s initiative? Tell us in the comments below, and stay tuned for more such interesting stories.